2℃ at The Aram Gallery in Covent Garden opened as part of this year’s London Design Festival. 2℃ brings together work from 10 designers with the aim of finding new ways to communicate the challenges of global climate change to a wider public.

When 195 nation leaders gather in Paris on 30th November 2015 for a UN climate change conference, they will be looking at how we can attempt to manage the global climate changes that threaten our environment, our futures and our planet itself. One of the priorities of the upcoming conference is how to prevent the global temperature from rising by more than 2℃, the UN target agreed upon in 2009. Alarmingly, the world is presently hurtling towards a predicted temperature rise of 4℃ to 5℃ by the end of the 21st century, a situation which would render vast areas of our planet uninhabitable.

We are all so familiar with the language of environmental issues – fossil fuels, greenhouse gases, carbon footprints et al – and we are constantly bombarded with climate change statistics. But these news stories and statistics can seem either too overwhelming to absorb or too terrifying to contemplate, so much so that many of us would rather not think about the enormity of the problem at all. It is this tendency to switch off and disengage from climate change issues that 2℃ aims to examine, raising questions about how we understand the global challenge ahead of us and how design can help to find new ways to present the issues to the public. 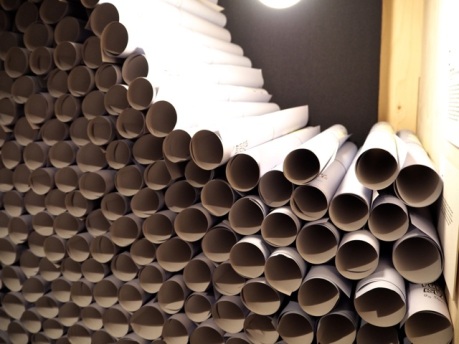 This exhibition at The Aram Gallery, the concept of which was devised by Disegno magazine, asked 10 designers to come up with ways to change how people think about the issue of global warming, a departure from the more traditional expectation of seeing design as a practical, problem-solving discipline.

The result, confidently curated by The Aram’s Riya Patel, sees an exhibition filled with hugely varied interpretations of the brief, as you might expect from a selection of designers who come from a wide range of different design backgrounds. Each displays their work for this exhibition in an individual booth. From designer Marjan van Aubel comes a series of closeup images of natural materials, rock formations and floods. And a precariously balanced candle and plant from conceptual designer Sam Baron puts energy consumption in the frame. In another booth, fashion designer and architect Maria Blaisse presents a flexible bamboo oloid shape that invites questions about how we humans relate and connect to nature. 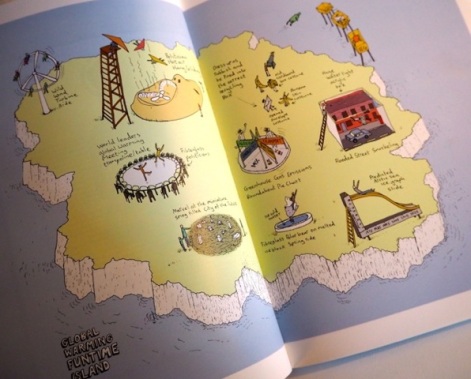 Two of the highlights of the show use contrasting ways to engage their audience. Artist/designer Dominic Wilcox has taken an ostensibly lighthearted route to convey the need for climate change action with his Global Funtime Island poster. On Wilcox’s tragicomic island visitors hang glide on a politician’s hot air, snorkel down flooded streets or go on a fibreglass polar bear ride on melted seaice in a grotesque global warming funfair. The second highlight is a contemplative work from furniture designer Ross Lovegrove in which the viewer is invited to peer through a slot to see a photograph of our planet floating in space. So small in the vast darkness of the universe, we can feel our own fragility. Very moving.

The exhibition is notable not only for the work of the 10 designers but also for the design of the show as a whole. Special mention should be given to the exhibition designers Universal Design Studio who have come up with a novel, easy-to-assemble way of displaying the work that, crucially, has minimal environmental impact. Each designer’s display booth is made from CNC-cut spruce unpainted plywood boards, held together by nylon and cut as little as possible to allow for future reuse. The Aram Gallery will donate the construction materials after the show and are inviting proposals from projects who would like to reuse them.

The Aram Gallery is fast becoming the go-to London gallery to see intelligent and thought-provoking design exhibitions and 2℃ is a fine example of the kind of innovative and collaborative work they are doing there. Go see it.

The 2℃ exhibition at The Aram Gallery is an extension of a feature of the same name in Disegno No.9, the latest issue of the biannual Disegno magazine.