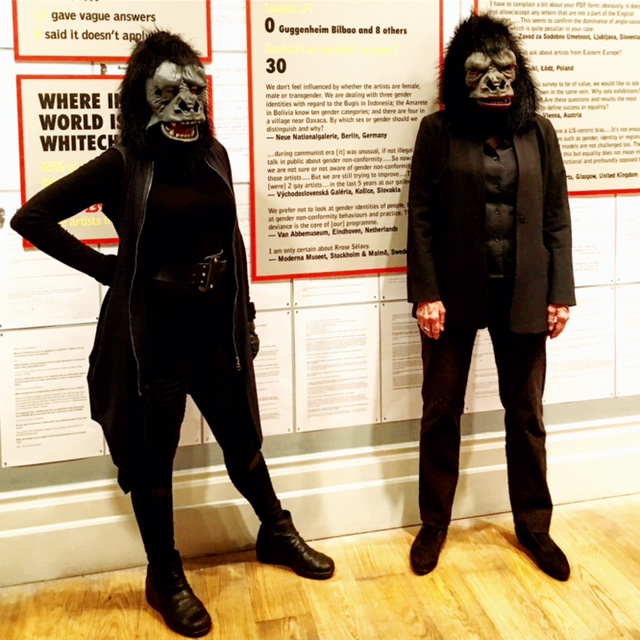 Guerrilla Girls: Is It Even Worse in Europe?
at Whitechapel Gallery
Until 5th March 2017

When the Guerrilla Girls first started to stir things up in New York back in the 1980s, confronting the establishment on the underrepresentation of women artists in museums, they probably themselves assumed, or at least hoped, they would not still have to be making the same points some 30+ years later.

But here they are. Again.

In this new exhibition at the Whitechapel Gallery, Is It Even Worse in Europe?, the Guerrilla Girls ask some awkward questions of Europe’s most illustrious contemporary art institutions and get some interesting, albeit sometimes depressing, answers.

The Guerrilla Girls are an anonymous group of feminist artist-activists who go by the names of famous women artists of the past – for the opening of this new show at the Whitechapel Gallery, ‘Frida Kahlo’ and ‘Kathe Kollwitz’ were in attendance – the group members preserve their anonymity by wearing gorilla masks whenever they are appearing in Guerrilla Girls character.

This latest from the group asks the question: Is it even worse in Europe? Revisiting their 1986 campaign, It’s even worse in Europe, the Guerrilla Girls sent out a questionnaire to the directors of nearly 400 contemporary art galleries and museums across Europe, asking them to respond to 14 questions about diversity in their institutions.

Some respondents wriggle and squirm under the scrutiny, some own up to failings and promise to do better in the future. Others meanwhile boast of their feminist and race-blind credentials, although it turns out such swagger is not always justifiable.

But tellingly, the most common reply to the questionnaire was no reply at all – of the 383 contemporary art institutions contacted, 282 failed to answer. They are all named and shamed in the exhibition, the list of non-respondents appears on the floor of the gallery and the Guerrilla Girls tell visitors to feel free to walk all over the list. FYI, the UK non-responders include Glasgow’s Gallery of Modern Art, London’s Saatchi Gallery and Liverpool’s Walker Art Gallery.

Kudos to the Guerrilla Girls for attempting to take the feminist pulse of some august European art institutions. We can only guess why so many kunsthalles and museums refused to answer. But I think we can safely surmise their answers would not have made for comforting reading.

Guerrilla Girls: Is it worse in Europe? is on at the Whitechapel Gallery until 5th March 2017.

All photographs ©The London Art File