Opening today to celebrate this year’s 800th birthday of Magna Carta, the British Library is putting on the largest exhibition ever staged exploring the history and legacy of one of the world’s most famous documents. 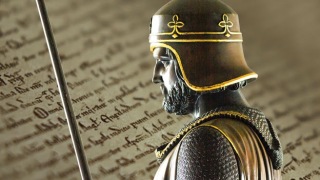 What was originally in 1215 a practical solution to a political crisis has become an internationally acknowledged symbol of freedom and considered to be the foundation stone of democracies around the world.
The exhibition traces the history of Magna Carta from King John through medieval battles, revolution, wars, empire and onwards right up to the modern day. Most excitingly, two of the four original 1215 Magna Carta documents are on show and the whole story is told with the help of other amazing documents and artefacts including Jefferson’s handwritten copy of the Declaration of Independence and one of the original copies of the US Bill of Rights, both of which are on display in the UK for the first time. Together with stunning manuscripts, paintings and royal relics, this is a once-in-a-lifetime chance to see these documents gathered in one place. Don’t miss it.
Exhibition continues until 1st September 2015
British Library
Euston Road NW1
http://www.bl.uk
MAP
Monday – Thursday 9.30am – 8pm
Friday 9.30am – 6pm
Saturday 9.30am – 5pm
Sunday and Bank Holidays 11am – 5pm
Admission: Adult £12/under 18s & Friends Free/various concs see website