Richard Diebenkorn
at Royal Academy of Arts
On now 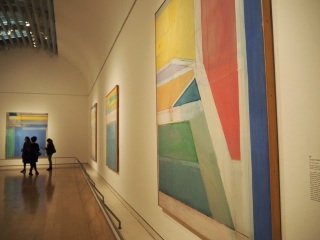 Richard Diebenkorn (1922-1993) is much better known in his native USA than he is here in the UK. There he is celebrated as one of the great post-war colourists and, after seeing this new retrospective show at the Royal Academy, you can easily see why.

Diebenkorn is highly unusual for having embraced abstraction in his early working years only to veer off into a representational period for a decade before returning to abstract art for the remainder of his career. What is even more unusual than this artistic changeability, is that Richard Diebenkorn was equally respected in all three of these periods.

The Royal Academy has given over a room of the Sackler Gallery to each of these three distinct periods of Diebenkorn’s output. The first contains the early abstract works from 1950 to 1956. Here on display are a number of large works, usually in a square format, of vigorous abstract expressionism. The Albuquerque series (1950-52) is full of the dusty ochres, reds and whites redolent of the high plateau of the Chihuahua Desert where Diebenkorn was doing his MA at the University of New Mexico. When he went on to teach at the University of Illinois in the mid 50s his work took on the pastel shades of Urbana. And on moving to Berkeley, Northern California, the surrounding green hills and San Francisco Bay are suggested in the broad brushstrokes and blocks of clear colour. It was this confident colour handling that first brought Richard Diebenkorn to the attention of the critics.

But Diebenkorn was not seduced by critical acclaim into sticking to a successful formula, he began in the Berkeley years (1956-66) to experiment with representational art. He performed an artistic volte face and for the next decade he produced highly figurative works. The second room in the RA’s show is devoted to those unexpected but brilliant paintings.

The still lifes of a knife in a glass of water and a pair of scissors are as different in subject matter and execution from Diebenkorn’s early works as to make it hard to believe they were produced by the same artist. However, the same fascination for landscape seen in the previous room can be felt in most of the other works in this second room and most especially in Cityscape #1 (1963) below, that is very Cezannesque. Beautiful.

Moving into the third and final room, entitled The Ocean Park Series (1967-88), you immediately see it’s all change for Diebenkorn again. 1966 saw Richard Diebenkorn moving from Northern to Southern California when he accepted a teaching position at the University of California in Los Angeles. He found a studio in the Ocean Park neighbourhood and the move precipitated a radical move away representation in his work. He returned to his first love abstraction but this time a much more structured, linear and geometric abstraction, quite different from his earlier swirling expressionist period.

In his studio by the ocean Diebenkorn experienced, quite literally, a sea change in his work. Gone are the green hills and the girls in deck chairs and in are cool blues and blocks of pastel shades of pink and yellow. These are quintessentially Southern Californian artworks although it should be noted that Diebenkorn himself claimed to be quite unaware of his surroundings when he painted. This third change was the change that was here to stay and Diebenkorn continued to work in this cool abstract style to great acclaim and to the end of his working life.

This a wonderful exhibition that in three rooms manages to give a fascinating insight into one of the most interesting American artists of his day. Highly recommended.

Admission: £11.50 (without donation £10)
Concessions available
Friends of the RA and under 16s go free

Open: Daily 10am – 6pm
Late Fridays until 10pm
and Saturdays until 8pm until 9th April