at The British Museum
Open now

The Venus Callipyge and her famous bottom may not be amongst the treasures on display here but there are plenty of equally callipygian figures, both male and female, in the new Spring blockbuster at The British Museum. In fact, you are greeted at the very start of the show by the buttocks of Aphrodite.

Perhaps better known as the Lely Venus, she gives you her full-on back view, looking at little bit crossly over her shoulder, as you enter the room. Behind her the Discobolos of Myron and the Parthenon river god Ilissos (newly returned from his controversial trip to the Hermitage in Russia) give a taste of the glories to come.

One of those glories and a highlight of the exhibition for me was seeing the Apoxyomenos statue above. I remember reading the news coverage when this heavily encrusted statue was found in the late 1990s lying on the sandy seabed off a Croatian island by a tourist diver, looking for all the world like the start of a Lara Croft movie. Now, after years of conservation, it is here for its first visit to the UK. The Apoxyomenos of Losinj is a stunning bronze of an athlete busying himself with the task of scraping his skin clean of the oil and sand that would stick to him after his exertions. It is stunningly detailed with inset red copper for the lips and nipples.
Now, inset red copper lips are one thing, what comes next might be the most jarring experience you will have in this show… brace yourselves. 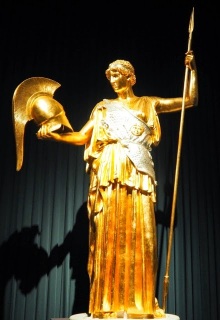 Horrors. Yes, yes, intellectually I know there is plenty of evidence to prove that the ancient Greeks painted and polychromed their statuary and sometimes covered them in gold and ivory but oh my, why is seeing it always such a shock? Would it really have been that gaudy? The replicas here look like something out of Caesar’s Palace in Vegas.

There are so many star exhibits in this show, almost an embarrassment of riches, but a shortlist of the standouts must include the amazing Nereid above with her wet, gauzy draperies clinging to her body, this life-sized sea nymph was made for the tomb of a Lycian ruler in about 390BC – just astonishingly skilful handling of marble. And the sculpture of a sleeping hermaphrodite with both male and female attributes, a lovely tussling nymph and satyr, and an outstanding assortment of Greek vases. There are plenty of much smaller gems to find too, look out for a tiny statuette of a rather petulant looking Sokrates.

The Belvedere Torso, a wonderful coup of a loan from the Vatican Museum for this exhibition, ends the show with a bang. This is the Roman marble, copy of a Greek original, which famously inspired Michelangelo who modelled his Adam for the Sistine Chapel frescoes on the huge headless, armless figure.

I am still not completely convinced by this new exhibition space at the British Museum and in Defining Beauty I certainly could have done without the heavily pleated curtains behind some of the statues, especially those red ones which were unpleasantly reminiscent of a 70s Roxy picture house – incongruously distracting and ruined what might have been some stunning shadows had they been cast on a plain wall.
But full marks for beautifully lighting, some outstanding loans from other museums and for taking some of the Parthenon sculptures out of the hideous Duveen gallery and breathing new life into them.
All photos © The London Art File
Open until 5th July 2015
Admission: