What is Luxury?
A V&A and Crafts Council exhibtion
at The Victoria & Albert Museum
Open Now

What is Luxury? is the third in a series of joint V&A and Crafts Council exhibitions, following Out of the Ordinary in 2007 and The Power of Making in 2011. What is Luxury? aims to explore our understanding of luxury by showing exceptional examples of contemporary design and craftsmanship alongside conceptual projects which ask questions about fundamental ideas of luxury, its production and its future. 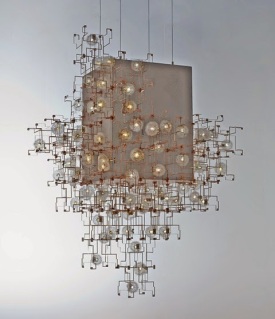 Over 100 objects have been brought together – from a diamond made from roadkill to a vending machine stocked with DNA, from a golden crown for ecclesiastical use to traditional military tailoring – which ask questions about what luxury is, how it is made and how we understand it both physically and as an idea.

The first part of the exhibition looks at objects that are defined as luxurious by their design and craftsmanship especially where the process of making the object is both time-consuming and requires a high level of skill. These include the Space Travellers’ Watch, an entirely handcrafted mechanical timepiece by renowned British watchmaker George Daniels, a laser-cut haute couture dress by fashion designer Iris van Herpen and a chandelier by Studio Drift featuring real dandelion seeds applied by hand to LED lights.

The relationship between luxury and materials is explored too. A traditionally luxurious material, gold, is re-examined in Aram Mooradian’s A Comprehensive Atlas of Gold Fictions – everyday objects made from gold mined in Australia, including a headphone jack and a pendant, are engraved with personal local histories to give them a new added value today. But the exhibition also looks at unexpected materials, such as human hair and toxic mud, that have been incorporated into luxury items.

What is Luxury? finally looks at how issues such as privacy, resources and access could determine future ideas of luxury. Gabriel Barcia-Colombo’s DNA Vending Machine contains pre-packaged DNA samples and asks visitors to think about how privacy and ownership of one’s own DNA could become a luxury one day.

This is an exhibition to get you rethinking your concept of and beliefs about luxury.