Tate Modern’s latest exhibition is the first comprehensive survey in the UK of the work of the abstract artist Agnes Martin (1912-2004). Although Canadian-born, Martin spent all her life after her school years in the USA. She came relatively late to art, attending art school in her thirties and getting her MA in 1952 when she was 40 years old. However, this late start did not hold her back and on moving to New York she quickly became part of the now legendary artists’ community that occupied the neighbourhood of Coenties Slip in lower Manhattan in the 1950s and 60s – her neighbours included Jaspers Johns, Ellsworth Kelly, Robert Indiana and Lenore Tawney.

The show opens unchronologically, with a small room showing a handful of the artist’s pastel striped later works as if to remind you where Agnes Martin’s work will take her. Probably a wise choice by the curators to give visitors a preview because the next room could have you thinking you had walked into the wrong exhibition.

This next room holds Agnes Martin’s earliest works. The strange, almost Miro-esque, biomorphic forms in these early canvasses are very different from the strict lines and grids that became Agnes Martin’s hallmark. And whilst it is interesting to see these early experimental works it is a relief to move on to the subsequent rooms that guide you through the much more familiar Martin territory of stripes, lines and grids in monochrome or the palest washes of colour and featuring Martin’s delicate pencilled lines.

The Tate has done an amazing job gathering a truly stunning selection of Agnes Martin’s work for this show. Room 4 holds three paintings from the early 1960s where you can see Martin’s work distilling into her signature style. These paintings The Islands (1961), Friendship (1963) and A Grey Stone (1963) have the square canvasses, the intersecting pencilled lines, the grid format that defined Martin’s abstract style.

Martin’s hallmark pencil lines are so pale and fine in most cases that it is difficult to see them in any detail so it is great that the Tate has a couple of glazed works where you can get up close to the surface to see the lines. Close up you can see where the artists’s pencil skipped or juddered on the painted surface or where, perhaps at the end of the day, she got slightly careless and missed a line or made an error. Although it is interesting to see the works at close quarters, it is at more of a distance that these paintings come alive – the hand drawn lines creating an oscillating optical effect that makes the surface seem to shimmer. 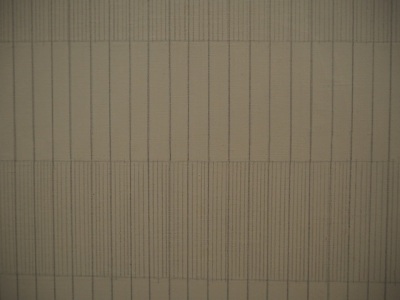 Room 9 holds one of the very few groups of paintings that Agnes Martin designated as a series, stipulating they should always be shown together. This collective work made in 1979 is called The Islands and comprises twelve canvasses each one in Martin’s standard 6 feet square format.

The Islands I-XII is an extraordinary group of works, from a distance seemingly twelve white squares but closer inspection revealing each to be subtly different – Martin’s emblematic fine pencil lines breaking up the canvasses into differing width stripes of the palest shades of whites. These white square canvasses are dazzling in the setting of a completely white room, so dazzling that it makes you realise how many floaters you have in your vision! Such peaceful whiteness seems to have the effect of washing your retinas clean so that when you leave this room and enter the next the very pale grey striped works there feel almost like an unwelcome assault on the senses.

In the final major room of the show are some of last large-scale works Agnes Martin created. She never stopped painting and even in her late eighties and early nineties, when she could no longer live alone, she would drive daily from her assisted care facility to her studio to work. Her only concession to age being that she reduced her canvas size from 6 feet square to 5 feet square to make them easier for her to handle and manoeuvre about her studio. Some stronger and deeper colours appear in these final works along with the introduction of a few triangular and trapezoid geometric shapes. And although she had often favoured leaving her work untitled, the artist gave a few of her last paintings titles like Blessings (2000), Homage to Life (2003) and Gratitude (2001) that perhaps reflect Martin’s feelings and state of mind as she approached the end of her long life.

The exit door is at the far end of this last room making it easy to leave the exhibition without seeing a small side room off to the right. Room 10 holds a number of small scale drawings made throughout Martin’s career, amongst them the artist’s last ever drawing from just before her death in 2004.

Touchingly, this final work from an artist famous for strictly controlled lines and grids on huge square canvasses is a tiny, simple, untitled ink sketch, no more than 2 inches high, of a potted cactus plant.
A small but perfectly formed ending to a big and beautiful show.

All photographs ©The London Art File

Exhibition on until 11th October 2015