The latest exhibition to open at Tate Britain is a long-overdue retrospective for Barbara Hepworth. It is right and good to see Barbara Hepworth, one of Britain’s greatest sculptors, getting a big multi-room show in London (astonishingly, her first for nearly half a century) and this Tate exhibition brings together an astonishing number of her works across the decades of her long career before she died so horribly in a fire at her home in 1975. 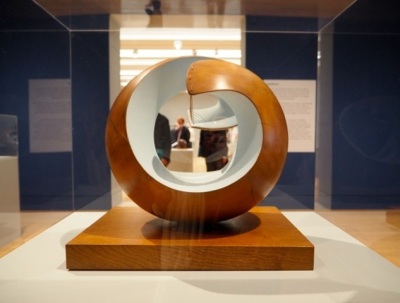 There’s been plenty of criticism in the press for this show regarding the perspex boxes that cover a great many of the works. True, it is not the most attractive solution to keeping the sticky fingers of visitors off the sculptures but I’m not sure what else the Tate could do. However, the problem is undoubtedly heightened because many of Hepworth’s works are small scale and the Tate has chosen to box them individually, so the galleries are crowded with transparent cubes on plinths. In some cases there are four individual boxes on one surface. 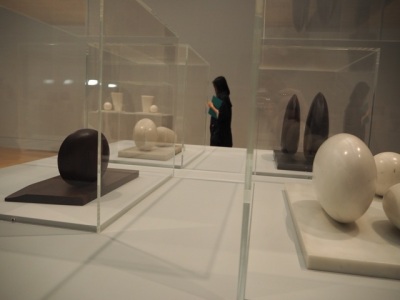 It is unquestionably a distraction and yes, the works would look so much better without the protective perspex. But they are a necessary evil because you do want to touch Barbara Hepworth’s work, exactly in the same way as you want to touch the pleasingly round knees of a Henry Moore seated figure or the sleek shiny planes of a Brancusi bird. You know you are not allowed to… but you still want to.


In spite of the attack of perspexitis the exhibition is suffering from, there are plenty of good things to see here – albeit through a glass clearly.

© The London Art File
The first room presents Hepworth’s early works alongside those of her contemporaries – such as UK sculpting titans Henry Moore (above Moore’s Musician 1929-30) and Jacob Epstein and other important, if less famous, names such as John Skeaping and Alan L. Durst. These early works from the 1920s show Hepworth as very much a central figure among British modernist sculptors of the time. Look out for Hepworth’s Contemplative Figure in this room – from 1928, it is one of her earliest surviving works and on show for the first time since 1968.

Another gallery looks at Barbara Hepworth’s relationship with her husband, the painter and printmaker Ben Nicholson (1894-1982). Hepworth said of her relationship with Nicholson, ‘It was a very splendid co-operation. We were very stern critics of each other’s works, and yet felt absolute independence.’ The two certainly inspired and encouraged one another. Hepworth’s unmistakable profile can be seen again and again in Nicholson’s paintings such as his 1933 (St Remy, Provence) above. There are wonderful, never-before-seen, personal photograph albums from the 1930s on show too, filled with photos of the artist couple, their studio and their work. 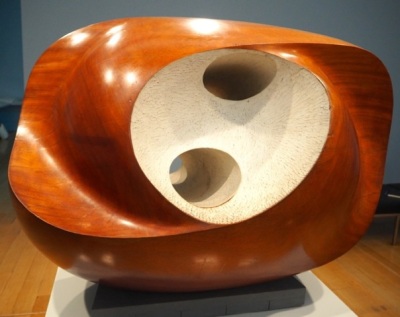 As the show moves on, the works increase in scale. The most impressive room in the show is the penultimate gallery, where the whole space is given to four huge carvings from 1954-5. Carved from the most beautiful African hardwood guarea, the four works together represent Hepworth at her absolute best. Free from protective screening (although obviously safely alarmed) they sit gleaming and polished on the outside with their hollowed out insides textured with Hepworth’s neat chisel marks and painted a creamy white.

© The London Art File
The final gallery brings together the bronzes shown at Hepworth’s 1965 retrospective at the Kröller-Müller Museum in the Netherlands. Set into a reconstruction of the garden pavilion space originally created by modernist designer and architect Gerrit Rietveld, these large scale bronzes come from the period in the late 1950s and early 1960s when Barbara Hepworth was becoming increasingly prominent on the international art scene.
This note of international importance brings the show to a close but Barbara Hepworth remains a very British sculptor. And that’s no bad thing.
Exhibition on until 25th October 2015

Leave a Reply to The London Artphile Cancel reply