Many of the exhibitions that have been on all summer are closing in September, which makes for a mighty long list of London exhibitions ending this month.

So if you want to catch one or two of these exhibitions before they are gone for good, here is a big selection of the London shows closing in September 2015 for you. Make a note in your diary… 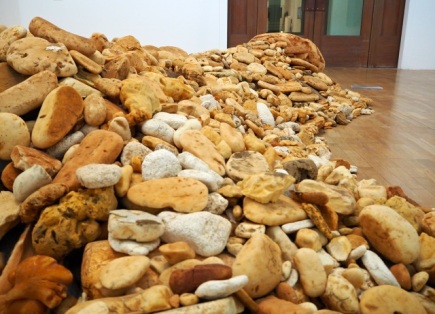 The London Open is the Whitechapel Gallery’s triennial open submission contemporary art show, open to all artists aged 26 and over living and working in London. The Whitechapel Gallery held their first open submission exhibition 83 years ago, back then it was ‘for all artists living and working east of the famous Aldgate Pump’, and for many years after The London Open was limited to artists working and living in the East End. Since 2012, the last incarnation of this three-yearly event, the parameters have been widened to include all artists living and working in ALL the London Boroughs. It is London’s Alternative Summer Exhibition and much more exciting. FREE.
www.whitechapelgallery.org

Carsten Höller: Decision at The Hayward is the artist’s largest survey show in the UK to date. Immersing visitors in a series of experimental environments, Höller’s interactive exhibition explores perception and decision making. To enter the exhibition visitors must choose between two different entrances, behind which lie separate routes through the first gallery. Once inside the exhibition, visitors encounter a range of situations – including the invitation to consume a pill, contents unknown – that ask them to reflect on the process of decision making.
www.southbankcentre.co.uk/venues/hayward-gallery

In Soundscapes, The National Gallery has commissioned musicians and sound artists to select a painting from the collection and compose a new piece of music or sound art in response. Immersive and site-specific, the experience encourages visitors to ‘hear’ the paintings and ‘see’ the sound. Sounds from Jamie xx, Susan Phillipsz and Nico Muhly. Paintings from Holbein and Cezanne and others.
www.nationalgallery.org.uk

From Ancient Rome to recent political upheavals, Fighting History looks at how artists have transformed significant events into paintings and artworks that encourage us to reflect on our own place in history. From the epic 18th century history paintings by John Singleton Copley and Benjamin West to 20th century and contemporary pieces by Richard Hamilton and Dexter Dalwood, the exhibition explores how artists have reacted to key historic events, and how they capture and interpret the past.
www.tate.org.uk/visit/tate-britain

A little gem of a display up in Room 6 of the NPG. Cornelius Johnson (1593–1661) is the forgotten man of seventeenth-century art, even though his paintings – all of them portraits – are found in many British museums, galleries and country houses. He was prolific and successful but, as a painter at Charles I’s court, had the bad luck first to be overshadowed by the superstar Anthony van Dyck, and then to have his British career halted by the civil wars. FREE.
www.npg.org.uk

Revelations showcases some of the earliest photographic images from the National Photography Collection by figures such as William Henry Fox Talbot and Eadweard Muybridge alongside striking works by modern and contemporary artists including Harold Edgerton and Hiroshi Sugimoto. On display for the very first time will be an original photographic print of X-Ray, the earliest recorded images of the moon and 19th century photographs capturing the hidden beauty of electrical discharges.
www.sciencemuseum.org.uk

Coral reefs are home to almost a quarter of all marine species. In this exhibition at The Natural History Museum visitors meet the inhabitants of these richly diverse habitats, and find out why reefs are so important and how their future is being secured. Encounter 250 strange and beautiful specimens from the NHM collections including the gigantic Turbinaria coral, the venomous blue-ringed octopus and coral collected by Charles Darwin.
www.nhm.ac.uk

We Want More: Image-Making and Music in the 21st Century at The Photographers’ Gallery
closing Sunday 20th September

We Want More explores the role photography and image-production plays in defining music culture today. This exhibition offers a subjective viewpoint on this vast arena and is presented across two floors, dedicated in turn to musicians and their fan bases. It includes works commissioned commercially as well as personal projects initiated by the photographers themselves and a selection of creative collaborations whose aim is to unpick the genre of Music Photography, which has become increasingly more difficult to define.
thephotographersgallery.org.uk

What is Luxury? interrogates how luxury is made and understood. The increase in prominence and growth of luxury brands against the backdrop of social inequality has raised new questions about what the term means to people today. Changes in culture and communication have also stimulated interest in less tangible forms of luxury, such as the desire for space and time. What is Luxury? frames work by designers, makers and artists using a selection of terms in order to engage with and expand upon current debate and provides an opportunity for thinking about the future of luxury in the 21st century. FREE.
www.vam.ac.uk

Everything is Architecture: Bau Magazine from the 60s and 70s at The Institute of Contemporary Arts
closing Sunday 27th September

This is the first significant presentation in the UK of the influential Vienna-based architectural magazine Bau: Magazine for Architecture and Urban Planning, published by the Central Association of Austrian Architects. The display includes original issues of the magazine published between 1965 and 1970; a period when a group of influential Austrian architects and artists including Sokratis Dimitriou, Günther Feuerstein, Hans Hollein, Gustav Peichl, Walter Pichler and Oswald Oberhuber, took over its editorship. The magazine became a platform to explore new experimental ideas which considered architecture beyond mere concrete and instead ventured into the realms of art and politics.
www.ica.org.uk