This is not only a brand new show but also a brand new London gallery space and I’m looking forward to seeing them both. Newport Street Gallery is a new gallery in Vauxhall in South London and is the brainchild of artist Damien Hirst. This new gallery has chosen John Hoyland (1934–2011) as the subject of their first exhibition. Hoyland is one of Britain’s leading abstract painters and ‘Power Stations’, Newport Street Gallery’s inaugural exhibition, presents a selection of Hoyland’s large-scale works dating from 1964 to 1982, displayed throughout all six of the gallery’s exhibition spaces. The first major survey of the artist to be presented since 2006, ‘Power Stations’ spans a pivotal period in Hoyland’s career, punctuated by his first solo museum show, at the Whitechapel Gallery in 1967, and his defining retrospective at the Serpentine Gallery (1979–80). This promises to be a powerful show and furthermore such an interesting and unusual choice for a new gallery suggests that the Newport Street Gallery will be an exciting new addition to the London art scene. Hooray. Oh, and it is FREE ENTRY. Double hooray.

As the fiftieth anniversary of Alberto Giacometti’s death approaches, the National Portrait Gallery opens Giacometti: Pure Presence, the first ever exhibition solely to consist of portraits by the artist. The exhibition will comprise over 60 works, including paintings, sculptures and drawings, from the entire range of Giacometti’s career. Most famous for his tall, thin, standing or walking figures, Alberto Giacometti (1901-66) is lauded as a leading modernist and surrealist sculptor working alongside the likes of Picasso, Miró and Ernst in Paris in the 1920s. The NPG’s show will cover the period 1914 to 1966, revealing Giacometti’s life-long preoccupation with portraiture and ’copying appearance.’ Including very rare loans from private collections and seldom-seen portraits this exhibition looks like it will be a fascinating insight to the portrait works of this Modernist master. 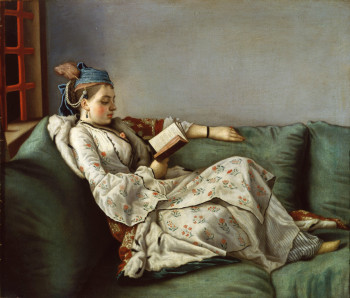 More portraits but this time at the Royal Academy and from the 18th century. Jean-Etienne Liotard was an artist in great demand across Enlightenment Europe and beyond. This idiosyncratic Swiss artist was one of the most accomplished portraitists of his day, commissioned to paint portraits of members of the British, French and Austrian royal families. He travelled widely – from London to the Orient – creating beautifully crafted portraits, the majority in his signature pastels on parchment.
A master of self-publicity, Liotard was quite an eccentric character. He was known as ‘the Turk’ for his adoption of Oriental costume following an extended voyage to the Near East, where he painted expatriate residents as well as scenes of everyday life in the Ottoman Empire. This new exhibition in the RA’s Sackler Wing is the first retrospective exhibition in the UK to be devoted to Liotard, bringing together over 70 rarely-seen works. Covering the artist’s time in Paris, Vienna, Geneva, Constantinople and London (where he exhibited work at the Royal Academy) this exhibition promises to be a stunning show. Beautiful portraits of opulently and exotically dressed sitters by one of the most charming characters in the 18th century artistic firmament – what’s not to like?