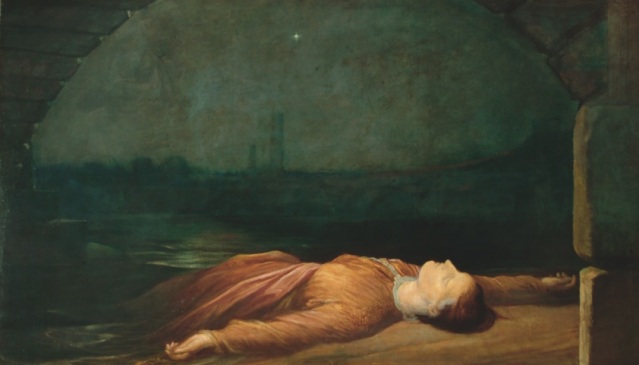 The Fallen Woman, the latest exhibition to open at The Foundling Museum, looks at the stories of the women who applied to give up their babies into the care of The Foundling Hospital in the nineteenth century.

In the early nineteenth century The Foundling Hospital changed its admittance process. The Hospital had previously operated an arbitrary, non-judgmental policy for admitting babies into their care. But from the 1830s the Hospital took the decision to only consider applications from women who could prove their honesty, sobriety and previous respectability and who were bearing their first illegitimate child. Only these women, who had ‘fallen’ from virtue, were thought to be worthy recipients of the Hospital’s charity.

The fallen woman became a familiar character in Victorian life, functioning in many ways as a cautionary tale for girls to warn them of the risks of losing one’s virtue. As a readily identifiable figure of pity and tragedy, the fallen woman was a popular subject for nineteenth century writers and artists. The exhibition includes some wonderfully evocative drawings and paintings of fallen women from major nineteenth century artists such as Dante Gabriel Rossetti, George Cruikshank and G.F. Watts. In Richard Redgrave’s The Outcast, a young woman cradling her baby is thrown out of her family home by her irate father while her sister begs him to relent. And in George Frederic Watt’s Found Drowned, the body of a young prostitute is washed up on the banks of the Thames. Numerous contemporary cartoons and illustrations, several included in this exhibition, featured women both pre and post ‘fall’ – the young, innocent and attractive woman, plied with alcohol and seduced becomes a pitiful creature, raddled by poverty, pregnant, alone and deserted by her seducer.

In a Victorian world that valued moral respectability above all things, bearing a child out of wedlock had dreadful repercussions in a woman’s life. It frequently led to estrangement from family, homelessness, unemployment and in some cases to prostitution and suicide. From the women’s point of view, having their baby accepted into the Foundling Hospital was an extremely attractive solution to their predicament. It not only meant the promise of a good life for their child but it also gave the women themselves the chance to start their own lives afresh, freed from the burden of raising a child alone.

Henry Nelson ONeil,
A Mother Depositing Her Child at the Foundling Hospital in Paris, 1855
© The Foundling Museum

Under the new admittance policy, women were obliged to persuade the Foundling Hospital of their previously good name, each presenting her case in person to an all-male panel of Governors. As the petitions on show in the exhibition demonstrate, the evidence these young women presented to the panel was filled with tales of abandonment, broken promises and deception. Many of the women’s stories included reports of violent assault and rape.

The strength of this exhibition lies in these often traumatic stories and the focus falls on the cases of a few individuals selected from the thousands of petitions in the Foundling Hospital’s archives. The despair and desperation evident in these women’s stories, still tangible to this day, makes for painful reading. Particularly as, despite the women’s best efforts, proving their previous virtue was not always possible and countless petitions were turned down. The Foundling Hospital could afford to be choosy and rigorously investigated the women’s claims and evidence, the smallest lies or inaccuracies in an applicant’s petition resulted in rejection. The governors sat in judgment, dividing the women into those deserving help and those that, in their opinion, did not. Only when the panel were fully satisfied of the woman’s previous respectability would she be granted permission to hand over her baby into the care of the Hospital.

As the exhibition makes clear, what can never be established is whether the stories in these petitions were entirely accurate. After all, the women would have been aware of the admittance criteria and highly motivated to furnish the panel with testimony that would give them the best chance of success.

Looking at the rejected petitions in this exhibition one can’t help but think of what being turned down by The Foundling Hospital meant. Each petition, with its story penned in now fading ink, represents the future of a mother and a child. Rejection of one meant rejection of both. What became of these women, not only branded fallen but also judged undeserving? And what became of their children?

Emma Brownlow, The Foundling Restored to its Mother, 1858
© Coram in the care of the Foundling Museum

But it’s not all tales of misery in The Fallen Woman. Thankfully, there were happy endings for some of the women who had their petitions accepted and gave up their baby to The Foundling Hospital. Harriet Hooper, who left her baby at the hospital in 1865, was able to return to claim her child five years later when her circumstances had improved after she had married. One such mother and child reunion at The Foundling Hospital is the subject of a charming 1858 painting in the exhibition, The Foundling Restored to its Mother by artist Emma Brownlow. Brownlow, the daughter of the Secretary of the Foundling Hospital, depicts the emotional moment when a mother is reunited with her daughter, the precious receipt she had been given years before in return for her baby fluttering, now forgotten, to the floor. While research has shown that such heartwarming reunions were unusual, it is good to see that they did happen for a lucky few.

A standout addition to the visual imagery and archive material in the exhibition is a specially commissioned sound installation from musician/composer Steve Lewinson which plays in a corner of the gallery. In this work the words of the women, taken directly from their petitions, are spoken by a host a famous actors, among them Maxine Peake, Marianne Jean-Baptiste and Ruth Jones.

The mothers have until now been shadowy, forgotten figures in The Foundling Hospital’s 200-year-old story, notable only for their absence. Now here in this excellent and powerfully affecting exhibition, so thoughtfully curated by Professor Lynda Nead, these mothers are at last placed centre stage. Now the women’s voices can finally be heard.

The exhibition is on until 3rd January 2016

The Fallen Woman exhibition was funded in part by The Art Fund‘s crowdfunder, Art Happens, which raised over £25,000.

The Foundling Museum is a National Trust partner, entitling members to 50% off admission on presentation of a valid National Trust England membership card