For lovers of chair design this new exhibition at the Barbican Art Gallery is something akin to chair-porn. Design’s original supercouple, Charles and Ray Eames, were responsible for some of the iconic chair designs of the 20th century and their seating designs feature in abundance in The World of Charles and Ray Eames. What instantly leaps to mind when you think of an Eames chair is the classic moulded plywood and black leather Lounge Chair with its matching ottoman that went into production in 1956. And, of course, the Eames Lounge Chair’s famous companion piece, the narrow and elegant Chaise – originally designed for Billy Wilder after the filmmaker asked Charles Eames to create a couch for Wilder to take brief naps.

Along with these beloved designs are all of the husband-and-wife team’s other famous chair designs, including their fibreglass and steel rod armchair, all are absolute design classics. Most are still in production today and just as, if not more, popular than ever. Of course, the examples on show in The World of Charles and Ray Eames are all the more fascinating, and covetable, for being the original prototypes.

But in the same way as Charles and Ray Eames’ work was so much more than just chair design, so is the exhibition. On show is their children’s furniture line, a recreation of the room they designed for the 1949 For Modern Living exhibition and even a prototype glider nose created for the military. The show also highlights that Charles and Ray Eames were inveterate champions of the importance of teaching design, of passing on the baton to a younger generation. That was not only true in their own practice and studio but also at colleges and schools of design across the States and indeed the world. Their role in the formation of the National Institute of Design (NID) in Ahmedabad, India in 1961 shows the kind of global reach Charles and Ray Eames enjoyed. NID remains one of the top design schools in the world to this day. The Eames ethos lives on.

The section At Home with the Eameses looks at the relationship between this unusual husband-and-wife team and also explores the home they created for their family. As well as the architectural models, photographs and drawings of their famous house, there are tons of personal items on display, loaned by the Eames family, many never seen before in the UK. Most revealing are the letters exchanged between the two. Ray’s especially are works of art in their own right, written on candy coloured paper, filled with excited exclamations, drawings and pasted-in hearts and love tokens. This was not only a hugely successful and long-standing professional partnership but it was unquestionably a true marriage of minds and hearts. After a lifetime of living and working together they were parted only when Charles died. Ray noted her husband’s death in her diary by filling the small page for 21st August 1978 with a neat, heavily circled, drawing of his initials, a strangely restrained but exceptionally touching expression of grief. Ray would die exactly ten years later, on the very same day as her husband. 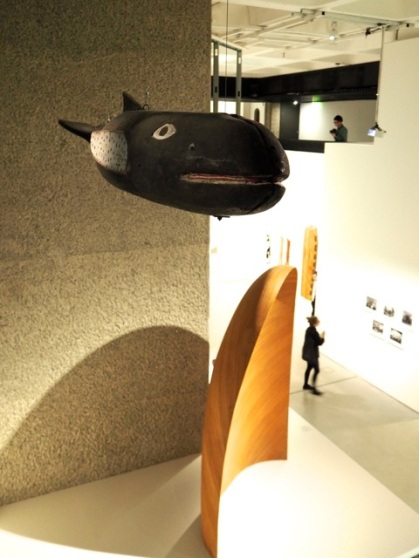 Suspended over the gallery’s staircase is one of the most unusual and unexpected objects in the show – a huge, naively carved, wooden whale. Made from two hollowed out halves, the shape of the whale very pleasingly echoes the curve of the prototype glider nose displayed below it. An artefact of the Pacific Northwest, this roughly-hewn whale was acquired by the couple, becoming a treasured object for them which they kept in their workplace for many years. If you look carefully as you wander around the exhibition, you can see this carved creature making cameo appearances in photographs of the Eames studio. Now here in London, hanging up there above all the Eames creations below, this surprising cetacean casts its sad staring eyes over a wonderful show, an absolute must-see for the legions of Eames fans and all lovers of postwar modernism.