The first major public solo presentation in the UK in more than 15 years for one of South Africa’s most important artists, William Kentridge, has opened at the Whitechapel Gallery. Kentridge is globally acclaimed for his drawings, films, lecture performances and opera and theatre productions. His work is influenced by philosophy, literature and early cinema and often links drawing and film.

Beautifully curated by Iwona Blazwick, William Kentridge: Thick Time features six works created between 2003 and 2016 – including two of the artist’s immersive audio-visual installations, The Refusal of Time (2012) and O Sentimental Machine (2015), neither of which have been previously exhibited in the UK. 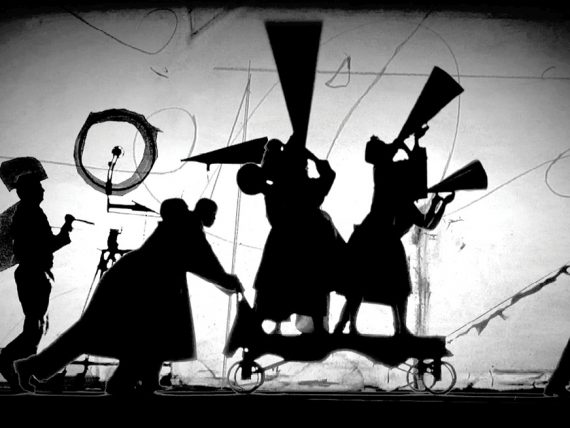 The show opens with The Refusal of Time (2012) Kentridge’s fascinating and engaging, multi-sensory installation made up of sound and moving images with a huge wooden mechanical bellows sculpture pumping rhythmically at its centre. Visitors can take a seat in the midst of the installation, watch the screens and listen to voices discussing theories of time.

Upstairs, O Sentimental Machine (2015) takes Trotsky and Russian revolutionary politics as its subject with a side order of 20th century technology, invention and industrialisation. And there are more mechanisms, this time randomly and startlingly coming to life, in the rattling sewing-machine-driven trumpet speaker of Heartbeat Sewing Machine (2016).

But my favourite of William Kentridge’s works here at the Whitechapel Gallery is 7 Fragments for Georges Méliès, Day for Night and Journey to the Moon (2003) a nine-channel video installation that sees stop-motion animations of lunar landscapes and everyday objects on magical journeys. And most wonderfully Kentridge himself, starring in his own performance piece – creating and reversing, drawing and erasing. Loved it.

Kentridge’s stuff is challenging, albeit enjoyably so, and it asks more than the average amount thought and time of the gallery visitor. That’s no bad thing. Good things don’t always come easy, or quick.

William Kentridge: Thick Time is on at Whitechapel Gallery until 15th January 2017.