The Curve series at the Barbican is right back on form (after a recent wobble – see Walead Beshty review) with Slow Movement from Swiss artist, Roman Signer, the latest special commission for the space. 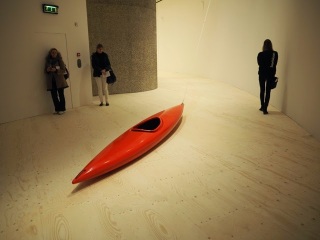 In this new work a red kayak is dragged along The Curve’s 90 metre length on a rope suspended from a ceiling track. The Curve series has been most successful when the artist has responded to the unusual shape of the long, narrow, scimitar-shaped space of the gallery (like the rolling balls of Jeppe Hein in 2007).  Here Roman Signer has treated the space like a dry river with the kayak leisurely traversing the bend in the ‘river’.

The empty kayak moves at a meditative pace, taking six minutes to make its journey from one end of the gallery to the other. The Barbican has estimated that the little boat will travel at least 10 kilometres a day and in the three months of the exhibition will cover nearly 1000 kilometres!

This is a simple but charming installation and represents a real return to form for the Curve series. Go and enjoy taking a meditative saunter alongside the kayak.