Wow! I loved this exhibition that takes 19th century art dealer Paul Durand-Ruel as the central figure around which the major players of Impressionism circled. Durand-Ruel was not only their dealer but also their friend, championing the Impressionist artists when no one else was interested and sticking by them even when they were mocked and ridiculed. As Claude Monet said “Without him, we would not have survived.”

Inventing Impressionism opens with a brilliant evocation of Paul Durand-Ruel’s Paris apartment. A huge blow up photograph of the living room as it was in then shows a room packed with Impressionist art. The actual door from the living room is here, the panels painted with flowers by Claude Monet, on show with the Rodin sculpture that sat on Durand-Ruel’s mantelpiece and the Renoir of a dancing couple hangs here next to the door just as it did in the apartment. It powerfully captures that particular time and shows how much Paul Durand-Ruel really loved these Impressionist works. He chose to surround himself with their art in his own home and had his children’s portraits painted by Renoir – those rarely-seen portraits are also on show in this first room.

The exhibition is arranged broadly chronologically and each of the following rooms takes an important event or exhibition to explore Durand-Ruel’s relationship with and importance to the Impressionist group. 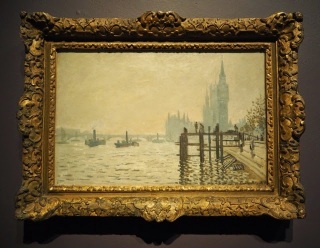 Firstly we see the Franco-Prussian war sending Durand-Ruel fleeing to London were he finds the artists, and fellow exiles, Monet and Pissarro and falls for their new work. Durand-Ruel becomes the hub around which the embryonic group starts to revolve – drawing in Manet, Degas, Sisley and the rest. The dealer tried hard to sell their work and put on exhibitions but to no avail. It all looks so beautiful to our eyes now, it is almost impossible to imagine how radical and daring these works were in their own time. This new modern style with its broken brushwork was roundly mocked and seen as a joke. The hostile reaction came from the public and from the art critics too, but Durand-Ruel persisted. He supported the artists financially, buying up their works in huge numbers, in his lifetime Durand-Ruel bought over 1000 Monets, 1500 Renoirs, 400  works by Degas and about 800 Pissarros.

This love affair with Impressionism could easily have ruined him and it very nearly did. But the Americans saved the day, and Durand-Ruel from bankruptcy, when they started to buy the Impressionists’ works in large numbers. A room of these works, many of which ended up being gifted to the major US museums, is a testament to Durand-Ruel’s persistence and his belief in the Impressionists. As he said himself, “At last the Impressionists triumphed… My madness had been wisdom. To think that, had I passed away at sixty, I would have died debt-ridden and bankrupt, surrounded by a wealth of underrated treasures…”

The highlights of the show are some of the reunited groups – all three of Renoir’s Dances are here, not seen together in the UK for 30 years, and five of Monet’s Poplars series have been gathered from around the world. Monet’s Poplars, which Durand-Ruel exhibited as a group in 1892, are incredible seen together and stunningly hung here along a curved wall, the weather conditions changing from overcast grey skies, through blustery winds, to full sunshine. Gorgeous.

Don’t miss Inventing Impressionism at the National Gallery. It is the best show I have seen for months if not years.