Indigenous Australia, the latest exhibition mounted at the British Museum, opens with a map of Australia that is at once familiar in its shape and yet quite unfamiliar in its topography. The country is shown broken up into a patchwork quilt of colours, each patch on closer inspection representing the lands of an individual tribal indigenous group and each one with its own language and traditions. This map is probably the single most effective tool the exhibition has for conveying how Australia was very far from a no-man’s-land, ripe for the taking when Captain Cook sailed into Botany Bay in 1770.

The subtitle of the show ‘enduring civilisation’ has a double meaning here – the indigenous communities of the Australian continent are both enduring as in long-lasting and continuing and also as in long-suffering.

The British Museum’s own collection forms the backbone of the exhibition. Unsurprising given that the British Museum holds a massive collection of indigenous Australian artefacts, amounting to thousands of individual objects, of which only a tiny proportion is ever on display. And it includes some of the very earliest objects acquired from the Aboriginal people and the Torres Strait Islanders as a result of British naval voyages and early colonist and missionary encounters.

Pervading the exhibition, and impossible to ignore, is the modern-day shame when presented with the typical acquisitive colonial white man’s interaction with First Nation peoples – beautiful, ancient and often sacred objects exchanged for a cheap pocket knife, a pouch of tobacco or some glass beads. To be fair to the British Museum, they do try to address the way in which these objects were acquired, whether they were handed over in friendship, forcibly taken in conflict or a mixture of different circumstances. Regardless it all feels somewhat uncomfortable and makes the apologetic references strewn liberally across the exhibition text very necessary. 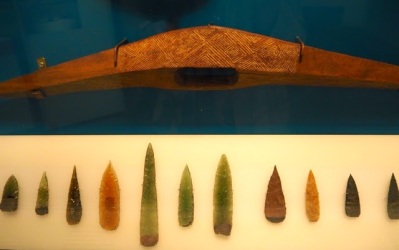 Putting to one side the circumstances of how these objects came to be in the BM (and some may, and do, argue why they remain there), there are some unquestionably stunning and important artefacts in this show, a fine turtleshell mask from the island of Mer in the Torres Straits acquired in 1855, an intricate feathered crocodile mask also from the Torres Strait Islanders and the famous shield said to have been collected by Captain Cook (or one of his men) in 1770 on his first voyage on The Endeavour, after it was dropped by a fleeing Gweagal man.

Along with the early artefacts are some much more recent exhibits, among them them several huge dot-paintings created in the last few decades by Aboriginal artists of great note. From the National Museum of Australia comes Yumari (1981) by Uta Uta Tjangala – a painting well known to all Australians as a design from the work forms a watermark on current Australian passports. And above is an even more recent work and newly donated to the BM, Kungkarangkalpa (Seven Sisters), 2013, painted by senior women of the Spinifex people in the Great Victoria Desert, a stunning painting that tells the story of sacred women’s business.

The Aboriginal culture is one without a tradition of written history, it is in fact in its very nature to be ephemeral and transitory, but that does mean that when it comes to putting on a show such as this you are always going to be left with the problem of dating the older objects. Throughout the exhibition you repeatedly see ‘before 1868’ or ‘before 1888’ on the objects, the only firm date being that of acquisition, unfortunately this makes it difficult to get a feeling for exactly (or even vaguely) where an object fits in to the indigenous culture’s 60,000+ year old whole. While this is no one’s fault, it does make for a slightly wooly and undifferentiated feel to the exhibition.

It is a brave choice for the British Museum to mount an exhibition of Aboriginal Australian artefacts, particularly as they are presently drawing attention to the highly contentious Elgin/Parthenon marbles in their Greek art exhibition. Only surprised the BM haven’t planned a Benin bronzes exhibition for next week so they can juggle all their political hot potatoes at the same time! 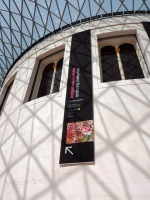