The Museum of London opened a small photography and film exhibition, London Dust, on Friday. This exhibition features works by London-based artist, Rut Blees Luxemburg (who created the iconic 2002 cover for The Streets debut album, Original Pirate Material), newly acquired by the Museum of London. 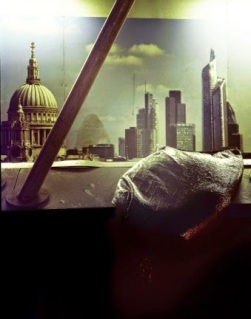 Blees Luxemburg’s large-scale photographic works explore the architecture and fabric of the city. These particular works for the London Dust series respond to the redevelopment of the City of London and the fallout from the 2008 financial crisis. With ever-rising property prices combined with the pressure to maximise space, London’s financial district has seen ever more fanciful towers appear in the skyline with nicknames such as The Cheesegrater, The Gherkin and The Walkie Talkie.

Blees Luxemburg’s six minute film London / Winterreise, 2013, set to a soundtrack that re-interpretes  Schubert’s song cycle, Die Winterreise, journeys from Shoreditch to the City. It passes the Occupy camp in Finsbury Square and the Bank of England and captures mid-construction building sites arriving finally at London Wall (current home of the Museum of London). As with the photographs, the film offers a commentary on historical London, the climate surrounding the financial crisis and the city’s architectural transformation.

The Museum of London has been keen to bolster their contemporary photography collection and these latest acquisitions will strengthen their collection greatly. Rut Blees Luxemburg is exhibited internationally and has works in public collections, including Tate Modern, the Victoria & Albert Museum and the Centre Pompidou in Paris. She is also a Reader in Urban Aesthetics at the Royal College of Art, London. Rut’s work is the first of many new contemporary photography acquisitions the museum will be making in the coming year.