It’s the end of the month and it has been a busy one.
To sort the wheat from the chaff and help you decide what to see at
London’s museums and galleries here’s…
The London Art File’s
Favourites from May 2015
Favourite New Exhibition 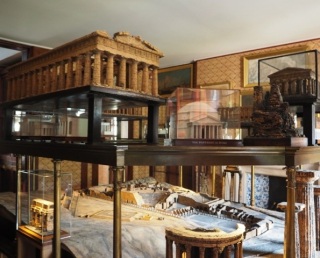 Not strictly speaking an exhibition as such, but this is without question the LAF’s must-see of the month. Since 2009, The Soane Museum has been working on restoring Sir John Soane’s private apartments to how they would have been in the early 19th century and this month they were finally opened to the public. It is the first time these rooms have been seen by the public in 160 years. The restoration is meticulous in its accuracy and the whole project is an astounding testament to the passion and skill of the team behind it.
Tours of the newly opened rooms are free until the 29th August 2015. Booking essential. Numbers limited.

And an Honourable Mention for Silent Sticks, Corin Sworn’s new installation at The Whitechapel Gallery – Glasgow artist Corin Sworn won the Max Mara Art Prize for Women early last year and as part of her prize was awarded a six month residency in Rome, Naples and Venice. This new installation at The Whitechapel Gallery is the product of Sworn’s time in Italy and her research into the Commedia dell’Arte. A fascinating mix of video, audio and objects and well worth a visit.

Richard Diebenkorn at The Royal Academy of Arts

This survey of the work of esteemed American colourist Richard Diebenkorn, looks at the three main phases of his career which led him from abstraction through a period of figurative painting and back to abstraction. Three rooms of absorbing painting. Closing Sunday 7th June.

The Charles Dickens’ Museum can be found down a small Bloomsbury street and this new exhibition that opened this month is an intriguing one. Dickens’ famously unfinished novel, The Mystery of Edwin Drood, has long baffled fans and academics, here the Dickens Museum investigates the possibilities.