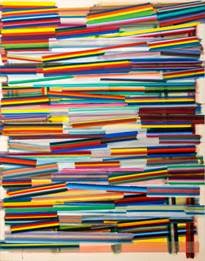 The Other Side of the Line is the first London retrospective for Bill Henderson. This exhibition of his work at The Bankside Gallery displays both large canvases and smaller works on paper made from the late seventies through to the present day.

The exhibition begins with a series of large scale abstract paintings from the late 1970s. Multicoloured bands of paint characterise these early works, with more shapes and motifs added as the works evolved in the 80s and 90s. In more recent paintings, from 2007 onwards, the polychrome bars have been replaced by painted lines creating paintings of ever greater complexity.

Artist’s Biography
Bill Henderson was born in Ringmer, Sussex in 1941. He studied at Brighton College of Art from 1959-1963, and at the Slade School of Fine Art from 1963-1965. From 1965-1981, Bill was a visiting tutor at Winchester School of Art, Chelsea College of Art and at the Faculty of Fine Art, South Glamorgan Institute, Cardiff. From 1981–2002, he was a Senior Lecturer in Fine Art at Central Saint Martins College of Art & Design. During his career as an artist he has exhibited in shows such as the Hayward Annual, the Serpentine Summer Show, The Royal Academy Summer Shows and the John Moores Liverpool Exhibition. His paintings have been exhibited in the U.S. and Europe. Bill Henderson has paintings in many public collections including Tate Britain, V&A, European Parliament, Arts Council England and Contemporary Art Society.

You will find The Bankside Gallery on the Southbank just down the steps from the Founders Arms pub, between Blackfriars South Station entrance and Tate Modern.