Open Door Tours of The Bank of England
Saturday 4th July & Saturday 11th July
Part of the City of London Festival 2015
FREE
Behind the scenes at the Bank of England
– home of owls, dragons, lions, griffins and snakes 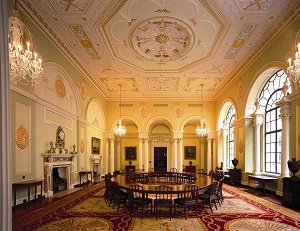 On two consecutive Saturdays in July the Bank of England will invite visitors into the working rooms and elaborate parlours within Sir Herbert Baker’s Threadneedle Street building.

The two free Open Door events are part of the City of London Festival. These tours are amazing opportunities to see the architectural treasures normally hidden from public view, the design details which appear throughout the building and the rooms in which some of the UK’s key monetary decisions are made.

The tours include a visit to the Bank of England Museum and its new exhibition, Flora and Fauna, an exploration of the plants and animals connected with the Bank, many of which can be found at Threadneedle Street.

The tours will reveal a surprising amount of wildlife, from the sculpted lions on the Bank’s bronze doors, the golden owls of the Committee Room and the griffins and snakes of Sir Robert Taylor’s Court Room, to the laurels, olives and oaks which decorate mosaics throughout the building.

The Flora and Fauna exhibition features elaborate and beautiful original floral banknote drawings and designs and the real animals that have served the Bank for over 300 years. It also explores the animals which thrive in the City of London, the creatures hidden in the Bank’s grandest rooms and the tiny fossils tucked away on £10 notes.

Among the architectural and historical highlights of the tours are a statue of William III by Henry Cheere, commissioned by the Bank and unveiled in 1735; the Committee Room, where Monetary Policy decisions are taken; and the grand Court Room, which includes a wind-dial, originally installed so that the Bank’s Directors could forecast the arrival of merchant shipping into London.

The Bank has occupied a building in Threadneedle Street since 1734. In 1788, Sir John Soane was appointed as ‘Architect and Surveyor’ to the Bank and worked until 1828 to extend its original building until it covered the whole 3.5 acres of the present site.

The Bank was Soane’s main pre-occupation for 45 years, a situation he described as ‘the pride and boast of my life’. His structure remained, more or less untouched, until it was demolished in favour of Sir Herbert Baker’s larger building, which rises seven storeys above ground (and reaches three below), and was built between 1925 and 1939. The windowless ‘curtain’ wall on Threadneedle Street is the only part of Soane’s original building standing today, although several lattice-backed chairs, made to his design, can be found in the Parlours and can be seen on the tours.

Admission and tours: FREE
There is no charge for admission to the Museum.