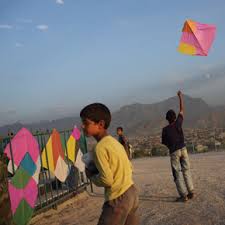 In the historic city of Kabul, the spring sunshine brings kite flyers out in their hundreds, and brightly coloured kites can be seen dotting the skyline. Kites From Kabul brings this spectacle to London, with a display of kites made by children in Murad Khani, the Old City district of Kabul. The display has been developed with the British charity Turquoise Mountain which works in Afghanistan. Turquoise Mountain is one of the Prince’s Charities and was established in 2006 by HRH Prince Charles and Hamid Karzai, former President of Afghanistan.

In Kites from Kabul, the entrance lobby at the V&A Museum of Childhood has been transformed with a colourful display of paper kites in flight. The rich heritage of kite flying is brought to life by photographs taken by Australian photojournalist Andrew Quilty in 2014 and 2015, at kite flying sites around Kabul and Bamiyan. There is also a video by filmmaker and writer Lalage Snow, giving a glimpse into the lives of children living in the Old Town.

Turquoise Mountain has been working in Afghanistan for nearly ten years, to revive historic areas and traditional crafts, and has restored over 100 historic and community buildings in the Murad Khani district of Kabul. It has also set up the Turquoise Mountain Institute for Afghan Arts and Architecture, which trains hundreds of young Afghans in traditional arts and crafts. The kites in this display are the result of a collaboration between the children of Murad Khani and students from the Institute.

About the V&A Museum of Childhood The V&A Museum of Childhood aims to encourage everyone to explore the themes of childhood past and present and develop an appreciation of creative design through its inspirational collections and programmes. The Museum is part of the V&A, housing the national childhood collection. The galleries are designed to show the collections in a way which is accessible to adults and children of all ages.