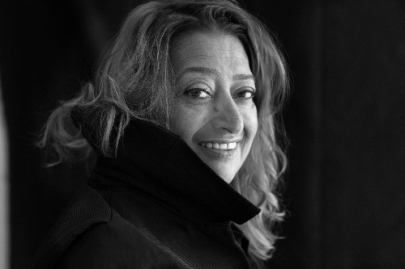 Zaha Hadid and the Black Cultural Archives were honoured yesterday at the New London Awards at a ceremony in the City of London’s Guildhall. The annual awards organised and held by New London Architecture celebrates the best designs and developments that have recently completed or are currently underway in the capital.

Zaha Hadid, the renowned architect behind the London Aquatic Centre and the Serpentine Sackler Gallery, collected the award for New Londoner of the Year for her contributions to the London design industry through her work, both in the UK and abroad, as well as her role as a champion of design to both the government and the general public. She follows in the footsteps of previous winners such as Lord Richard Rogers and Roger Madelin of Argent.

The Black Cultural Archives in Brixton saw off stiff competition from much larger new-build developments to be crowned London’s best new building. Their project saved the historic Raleigh Hall from demolition and created a new home for BCA’s extensive archives dedicated to black heritage in the UK. This sensitive restoration proves that true design innovation can be found when saving a building from demolition and repurposing it for the local community.

Another noteworthy winner is the Garden Bridge by Heatherwick studio, which was crowned the best forthcoming scheme in the Transport & Infrastructure category. Designed by Thomas Heatherwick, the famed creator of the Olympic Cauldron and the new Routemaster London bus, the scheme was celebrated for providing the potential to help transform London for the better; and is arguably the most discussed future project in the capital. The international jury from Paris, New York, Edinburgh and Stockholm were unanimous in their decision.

The masterplan for Blackhorse Lane in Waltham Forest, by young practice We Made That picked up the inaugural Mayor’s Prize. Honoured by Boris Johnson, this inspiring scheme redefines the streetscape, shops and navigation of the area, whilst supporting the diverse enterprises in the region. The masterplan demonstrates the wealth of projects that are taking place throughout London and that investment and development is not just confined to the centre of the city.

Other winners at the event included the Ham Yard Hotel by Woods Bagot and the future extension to Alexandra Palace by Feilden Clegg Bradley, who were awarded the Homes & Hospitality and Public Buildings titles, respectively.

The major regeneration of the National Theatre by Haworth Tompkins picked up two awards, as the built winner of the Public Buildings category for its contribution to the ongoing regeneration of the South Bank, and also a special award for Commissioning Excellence, recognising the client’s considered approach to redeveloping this key London institution.

The new Foyles store claimed the Retail category whilst the newly completed King’s Cross Pond Club narrowly missed out on the Temporary award, which was presented to The Green Room. Celebrated for its ‘untemporary’ approach, the project was a collaboration with the National Theatre to create a restaurant, bar and garden.

About New London Architecture
NLA was founded in 2005 to provide an independent information resource and a forum for discussion and debate about London’s built environment for professionals, the public and politicians. Since that time it has successfully established itself as an influential locus for discussion about architecture, planning, development and construction in the capital with a year-round programme of events, publications and exhibitions, and a core mission – bringing people and ideas together to shape a better city.

The New London Awards are supported by the Mayor of London and sponsored by Ascent, Broadgate Estates, Luxonic Lighting, Turley and Urban Space Management.

NEW LONDONER OF THE YEAR
Zaha Hadid
Dame Zaha Mohammad Hadid, DBE is an Iraqi-British architect. In 2004 she became the first woman recipient of the Pritzker Architecture Prize and received the Stirling Prize in 2010 and 2011. Her buildings are distinctively neofuturistic, characterised by the “powerful, curving forms of her elongated structures” with “multiple perspective points and fragmented geometry to evoke the chaos of modern life”. She is currently professor at the University of Applied Arts Vienna in Austria.

OVERALL WINNER
Black Cultural Archive
Client: Black Cultural Archives
Architect: Pringle Richards Sharratt
Borough: Lambeth
Completion: July 2014
Sited at the heart of historic Brixton, the project has brought Raleigh Hall back from the brink and into active use. The derelict Grade II listed building, which had been on the English Heritage’s Heritage at Risk Register since 1992, was gifted to the BCA by Lambeth Council to provide a permanent home dedicated to black heritage in Britain. The project has produced creative alteration and extension of the former semi-detached houses, and is one of the few places in the UK to meet national archive standards.

MAYOR’S PRIZE WINNER
Blackhorse Lane
Client: LB Waltham Forest and Greater London Authority
Architect: We Made That
Borough: Waltham Forest
Completion: June 2014
As a precursor to future mixed-use development, the area-wide proposals address issues of poor perception and functional operation of the existing industrial estates, and seek to support the diverse enterprises in the area. The modest available budget and complex urban context lead to the development of a dexterous series of proposals, including transformations to streetscapes, shops and industrial frontages, as well as a new shared-access workshop, producing an accumulative and aggregated approach to regeneration, and delivering a characterful, tailored project that is both context-responsive and highly ambitious.