This group exhibition looks at the work of designers who have taken ordinary materials and objects and with the application of some imagination, technical know-how and flair transformed them into something quite different. The Aram Gallery has brought together this international group of fourteen designers who are working in a mix of design areas including furniture, lighting and jewellery. 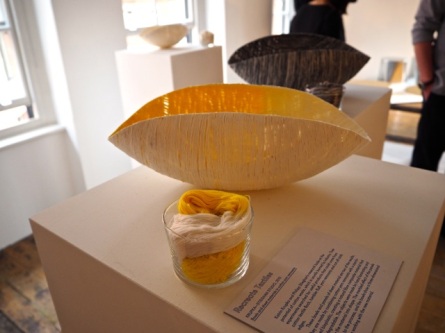 There is a huge diversity in the works on show. Lex Pott’s rings are created by carefully drilling out the centre of Euro coins to leave the rims, whilst Roisin Johns makes her jewellery from polystyrene, eggshells and paper. Both designers call into question the arbitrary value put on raw materials. Katrin Krupka and Philipp Stieghan have made their elegant sculptural bowls from cotton yarn remnants combined with a starch-based bioplastic. And galvanised steel ducting is transformed into sleek stools by David Steiner.

One of the highlights of the show comes from Spanish designer Jorge Penadés who addresses the question of waste from the leather industry with his Structural Skin work. More than half of an animal hide is discarded by fashion, furniture and footwear manufacturers, creating a huge amount of wasted leather much of which ends up as fertiliser despite having been previously chemically treated. Penadés has come up with an alternative way of utilising these leather offcuts. Bonding leather scraps with bone glue and forming them into a structure, he creates beautiful furniture such as the side tables topped with polished brass surfaces on show here. 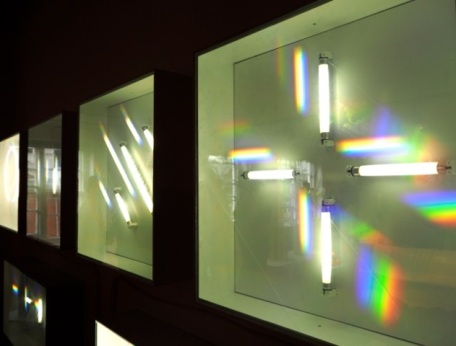 Another standout work is by Rachel Harding who in Wonderfluro has transformed the ubiquitous fluorescent light.  By adding spectrum glass to the shaped fluorescent tubes in her aluminium wall lamps, Harding releases a prismatic rainbow of colours from the white light. A simple idea that makes a functional workaday object into something decorative and even desirable.

Extra Ordinary is an inspiring exhibition that shows how mundane materials can be recycled, rethought and reinvented by a leap of imagination and creativity.