Music, celebration and healing: the Sudanese lyre
at The British Museum
Open Now
Until 16th August 2015

As part of the Celebrating Africa season, the British Museum has selected a magnificent 19th century Sudanese lyre as the focus for the latest Asahi Shimbun Display, a free display in Room 3. 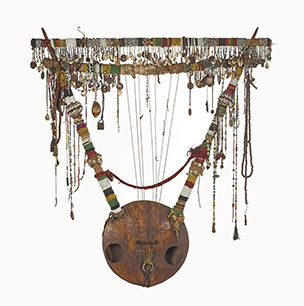 Known as a kissar, a Nubian word meaning ‘skull’, this extraordinary-looking instrument would have been played by a singer, minstrel and spiritual healer in ceremonies associated with cults collectively referred to as zār in Ethiopia, Sudan and Egypt.

This 19th century example of a kissar from Nubia in Northern Sudan is adorned with a huge number of objects which acted as charms in these zār ceremonies. The charms are remarkable in that many of them originate from lands and islands far distant from the lyre’s native Nubia. Coloured beads, cowrie shells probably from the Maldive Islands, a strange mechanism possibly from a pistol, bells and coins (mostly Ottoman coins minted in Cairo but also coins from Great Britain, Yemen and even Sumatra). These international influences reflect the Nubian area’s importance as a major hub linking north Africa and the Mediterranean with the Middle East and the Indian Ocean. Both long distance trade networks and pilgrimage routes crisscrossed the area and many of the zār spirit identities were based on characters that passed through – European military and colonial officials, Catholic priests, Turkish traders and Christian missionaries.

If you would like to know more about this extraordinary instrument there will be a gallery talk by Elsbeth Court from SOAS (The School of Oriental and African Studies, University of London) on Friday 7th August.