Exhibitions in London closing in the next couple of weeks,
catch them while you can: 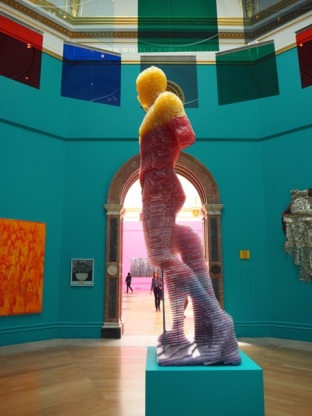 The Summer Exhibition is the world’s oldest open-submission exhibition: its earliest exhibitors included the likes of Reynolds, Constable and Turner. This year, the exhibition is co-ordinated by Michael Craig-Martin RA – a leading artist of his generation and the teacher who nurtured the talents of Gary Hume, Sarah Lucas and Damien Hirst. The Summer Exhibition has everything from painting, printmaking and sculpture through to installation, photography and film. With many works in the exhibition on sale, the show also gives you a chance to own some original art while supporting the historic Royal Academy Schools; artwork sales help The Royal Academy Schools to continue the free tuition they have offered for nearly 250 years.

This exhibition at The Aram Gallery in Drury Lane looks at the innovative work of  a group of young designers who are working with ordinary materials, products and processes in extraordinary ways. From Lex Pott’s gold ring made by drilling through a 10 cent coin, to the leather scraps compressed into table legs by Jorge Penades, to Ying Chang’s vases moulded out of bubble wrap, the works on display pose questions about value and beauty and propose alternative directions for craft and industry.

In this show the RA celebrates the art of Eileen Cooper RA with an exhibition of drawings spanning almost 40 years of her career. Timed to coincide with the publication of a monograph celebrating Eileen Cooper’s career, the exhibition presents drawings that explore such subjects as sexuality, birth, family, fecundity and creativity.

This exhibition explores how men and women found new ways to dress as the rationing of clothes took hold. Displays of original clothes from the era, from military uniforms to functional fashion, reveal what life was really like on the home front in wartime Britain. The exhibition demonstrates that wartime austerity was not about the end of fashion but about creativity, innovation and coping in adversity, the impact of which can still be seen upon British style today.

The first major exhibition to survey watercolours by celebrated British artist Eric Ravilious (1903-42). Well known for his iconic work for Wedgwood, Ravilious is widely considered one of the key figures in mid-20th century British design but he was also one of the finest watercolourists of the century. Over 80 watercolours are on display – including famous works like Train Landscape and Westbury Horse as well as rarely seen works from private collections providing an inspiring look at his work between the mid-1920s and his premature death in 1942.