Exhibitions at The Whitechapel Gallery can generally be relied upon to throw something artistically interesting into your path. This latest at the Whitechapel, from Palestinian artist Emily Jacir, is certainly an exhibition that grabs and holds your attention. The show opens with the work that won Jacir the Golden Lion at the 2007 Venice Biennale, Materials for a film (2004-ongoing), an installation contained here in an enclosed area on the ground floor gallery. In this work, Jacir has gathered documents and photographs to tell the story of a Palestinian writer, Wael Zuaiter, who was assassinated outside his Rome apartment by Israeli Mossad agents in 1972.

Materials for a film is a powerful piece, not least because Wael Zuaiter is presented as an appealingly warm character. It is very hard not to find yourself concurring with Jacir’s viewpoint and seeing him not as the suspected terrorist but as the simpatico and gentle poet, who was working on the first direct translation of A Thousand and One Nights into Italian when he was shot down on the street. Jacir does a fine job of bringing Zuaiter to life – partner, friend, son, correspondent, reader, music lover. As you walk around the tight turns of this white-walled maze you are shown letters between Zuaiter and his partner Janet, the covers of the paperbacks he read, and you can even listen to the music the writer was listening to at the time of his death (Mahler’s 9th, if you’re interested). It is no surprise that this work stemmed from an unrealised project to make a movie of Zuaiter’s life, there is certainly something of the movie storyboard about it.

Other highlights include linz diary (2003) a sequence of photographs taken from exactly the same spot overlooking a huge public square in Linz, Austria, every day at 6pm for 26 days. In each Jacir herself appears and in the written comment for each photograph the artist tells you where she can be found. But naturally you find yourself trying to locate her without the hint, like a game of artistic Where’s Waldo? – here she is balancing on the edge of a fountain, there holding a supermarket bag, or there leaning against a wall.

The upper galleries provide further insight into the artist’s ongoing dialogue with Europe. Among the best of the works is stazione (2008-9) her work for Palestine at the 53rd Venice Biennale in which she relabelled Venice’s Vaporetto stops by adding the translation of the stations’ names in Arabic. And mention should also go to Jacir’s film Lydda Airport (2009) which focusses on the Palestinian airport in its heyday of the 1930s – the sound of the clackety-roar of vintage aircraft engines fills the gallery space. 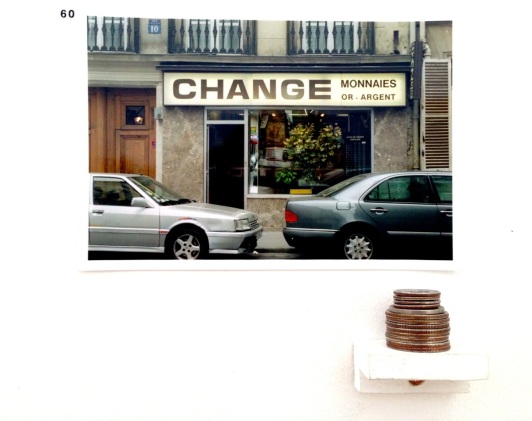 But the standout work in the upper gallery is Change/Exchange (1998) which was the artist’s very first performance piece, prior to that Jacir had been a painter, sculptor and installation artist. In this work Jacir took a hundred US dollar bill, went into a random Bureau de Change in Paris and changed it into French francs (days before Euros). She then went into another and changed the francs back into dollars and repeated this transaction over and over, losing a little each time with rates of exchange and the occasional stinging commission, until only a small stack of coins, which cannot be changed, remained. It speaks of the incremental losses of our lives, some small and almost imperceptible, others larger and more keenly felt.

There is much in this exhibition to enjoy, the unpredictability and varied nature of Emily Jacir’s work making it a wide-ranging and absorbing pleasure.

The exhibition is on until 3rd January 2016.