Death and Memory: Soane and the Architecture of Legacy
at Sir John Soane’s Museum
Open Now
Until 26th March 2016

A portrait of Sir John Soane hangs over the fireplace of the dining room of 13 Lincoln’s Inn Fields, in it the 76 year old architect looks out over what is now a room of his eponymous museum with a benign gaze. He looks a happy man, or at least a contented one. But the painted appearances of portraiture may deceive. As this latest exhibition at the Soane Museum suggests, Sir John Soane (1753 – 1837) had more than his fair share of personal sadness in his life.

Death and Memory: Soane and the Architecture of Legacy looks at Soane’s relationship, both personal and professional, with loss and remembrance, and it is a fascinating exhibition on both fronts. Soane’s own family troubles and tragedy lie at the heart of the famous architect’s preoccupation with death. The exhibition is timed to coincide with the 200th anniversary of the death of Sir John Soane’s beloved wife Eliza on 22nd November 1815. Soane was completely heartbroken by his wife’s death and he never fully recovered from her loss. The grief was compounded by Sir John’s conviction that his own son was responsible for his mother’s death. 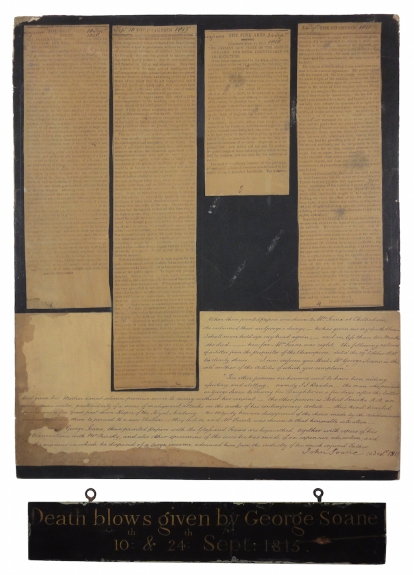 John and Eliza Soane had two sons, John and George, and whilst early family life had been happy, later years would see the family disintegrate. Neither son showed the slightest interest in following their father into a career in architecture, much to John senior’s disappointment and displeasure. The elder son, John, was a sickly consumptive who would die prematurely and the younger son, George, a feckless ne’er-do-well whose talents seemed to be confined to running up debts all over London. George was already largely estranged from his parents when in 1815 he emerged from a stint in debtor’s prison. When two articles were published that same year in The Champion newspaper, damning the state of English architecture and more specifically the architecture of a certain Sir John Soane, it took Soane little time to ascertain the cruel and scurrillous words had been written by his own son George. When Eliza Soane read these articles, she reportedly exclaimed to her husband: “This is George’s doing… I will never hold my head up again. He has given me my death blow.” Eliza, already delicate, shortly after fell seriously ill and died less than 2 months later.

Sir John Soane was devastated and would forevermore blame his son for causing “the death of all that was dear to him.” He had the offending newspaper cuttings mounted on a wooden board, had a title painted for it that reads, Death Blows given by George Soane and had it nailed up in full view in the dining room. The rift was permanent, father and son would never speak again, displaying the sort of grudge-bearing and unwillingness to forgive that would see them all sat down for some family counselling these days.

The loss of such a dearly loved wife left Sir John Soane, for the remaining 22 years he lived, with a preoccupation with death that haunted his personal life and the first room of the exhibition focuses on those painful family losses. As well as a copy of the Death Blows of George Soane there are many highly personal items from Soane’s life including a lovely miniature portrait of Eliza from the early days of their courtship. And, of course, drawings and prints of the architecturally-renowned tomb Soane designed for Eliza, now a Grade I listed monument, the roof of which would go on to be the inspiration for the UK’s red telephone boxes.

The second room of the exhibition examines Soane’s public and professional relationship with mortality. On show is a beautifully curated selection of Soane’s vast collection of drawings and designs of funerary monuments, architecture and mausoleums, amongst them works by Piranesi, Robert Adam and Nicholas Hawksmoor. Most of these amazing drawings are very rarely displayed and one – a proposal for a display of cinerary urns covering an entire wall of his Museum – has never been exhibited before. In addition to the drawings there are some fantastic objects on show including a Roman urn and, most brilliant of all, a rather bizarre model of an Etruscan tomb with a hinged roof, complete with a miniature skeleton as the sole occupant of this macabre dollshouse.

This is a wonderful and revealing exhibition and one cannot help but think that Soane’s personal losses have ultimately been to our benefit as a nation. In a glass case here in this exhibition lies the Private Act of Parliament that Sir John Soane set up to bequeath his house and his collection to the nation. Without the premature losses of wife and son and the estrangement of his other son we may well have lost all the wonders of the Soane Museum that are now ours. We have the privilege of visiting Soane’s house and seeing his collection as a direct result of the personal tragedies of the great man’s life. Soane’s personal losses have indeed been our national gain.