The staircase at Two Temple Place © Will Pryce

It’s always a pleasure to see the extraordinary late-19th century edifice, Two Temple Place, reopen for its annual Winter exhibition. Past exhibitions in previous years have focussed on William Morris, Cornish artists and the collections of Lancashire cotton mill owners. Two Temple Place on the Thames northbank just upstream of Blackfriars Bridge, is itself worth the visit alone, drawing visitors back year after year to marvel at this rarely-open London treasure. The fairytale castellated exterior of the building (look out for the two verdigris cherubs talking to one another on the telephone at the bottom of the steps to the front door) is only outdone by a knockout interior that includes not only a dramatic mahogany staircase adorned with carved statues of characters from The Three Musketeers, typical of the eccentric decoration throughout the building, but also two vast stained-glass windows at either end of the Great Hall – one depicting a sunrise at the eastern end and at the western end a gloriously vibrant sunset, pick a sunny day and you will be treated to the glass casting its luminous colours across the wood panelled walls.

This year, this neo-Gothic architectural gem and former office of William Waldorf Astor, is hosting Beyond Beauty: Transforming the Body in Ancient Egypt, a major exhibition that looks at the fascination the Ancient Egyptians held for enhancing and transforming their physical appearance both in life and in death. Beyond Beauty has been created by The Bulldog Trust charity, which now owns and runs this splendid building, in partnership with 7 regional museums from all over the UK* and curated by Egyptologist Dr Margaret Serpico with Egyptian Archaeology PhD student Heba Abd el Gawad. Mounting this exhibition represents a long-cherished aim for Dr Serpico, who says: ‘The desire to unveil the fabulous objects held in these museums was borne out of a long term project to raise awareness of some of the 200 ancient Egyptian collections in the UK, many in regional museums. I have always been amazed by the many wonderful artefacts in these collections, objects that I wished could be seen by wider audiences. This exhibition is a fantastic opportunity to celebrate these collections and appreciate how important it is that we care for and preserve them into the future.’

The artefacts on display in Beyond Beauty span over four millennia, from 3,500 BC to 400 AD, and originate from archaeological excavations discovered by a number of pioneering Victorian Egyptologists, amongst them some iconic names in Egyptian archaeology such as William Flinders Petrie. Finds from these digs were shipped back to Britain and distributed to a huge number of regional museums who received artefacts in return for financial support for British excavations in Egypt. The collections of objects from each excavation were seldom kept together and were split up, often quite arbitrarily. It is one of the great pleasures of this exhibition to see many of the objects reunited here for the very first time since their arrival in the UK all those years ago.

But the thing that makes the Beyond Beauty exhibition so special, setting it apart from many other Egyptology exhibitions, is that it looks at the lives and deaths of ordinary Ancient Egyptian people. These people were not Pharaohs but regular citizens living ordinary and often very recognizable lives. It makes the exhibition feel both intimate and relatable to see how very like us these people were, that despite being separated by several thousand years we continue to share many of the same concerns, problems and desires.

In the lower galleries of Two Temple Place there are painted and inscribed tablets that show the styles and fashions of the day and also some wonderfully evocative personal belongings that demonstrate how Ancient Egyptians adorned and beautified their bodies in life. Polished mirrors, necklaces of tiny beads, scent bottles, green and black eye makeup, hairpins and ornate ointment jars show that the Ancient Egyptians were just as obsessed with enhancing their physical appearance as any 21st century person. Vanity is an eternally human preoccupation it would seem.

In the upstairs galleries which include that amazing Great Hall, the exhibition examines how that same fascination with adorning and enhancing their physical appearance continued through death and on into the afterlife. The process of mummification is explored and explained with a number of intriguing objects – make a point of looking out for a group of four canopic jars, used to hold the organs of a mummified body, each of which has a lid carved in the shape of The Four Sons of Horus. From Touchstones Rochdale, these jars are exquisitely elegant and one of the real highlights of the show. In the Great Hall there are mummy masks, coffins, sarcophagi, and cartonnages, all in a remarkable state of preservation with astonishingly bright jewel-like colours and gleaming gilding adorning their surfaces. One of the highlights is the stunningly decorated mask made for a Roman civilian, Titus Flavius Demetrios, who around 100 AD chose to be immortalised with a beautiful Egyptian gilded mummy mask. He is also possibly the happiest, smiliest looking mummy you may ever see and with a fine set of fluttery false eyelashes to boot – what a stylish way to present yourself to the gods of the afterlife. 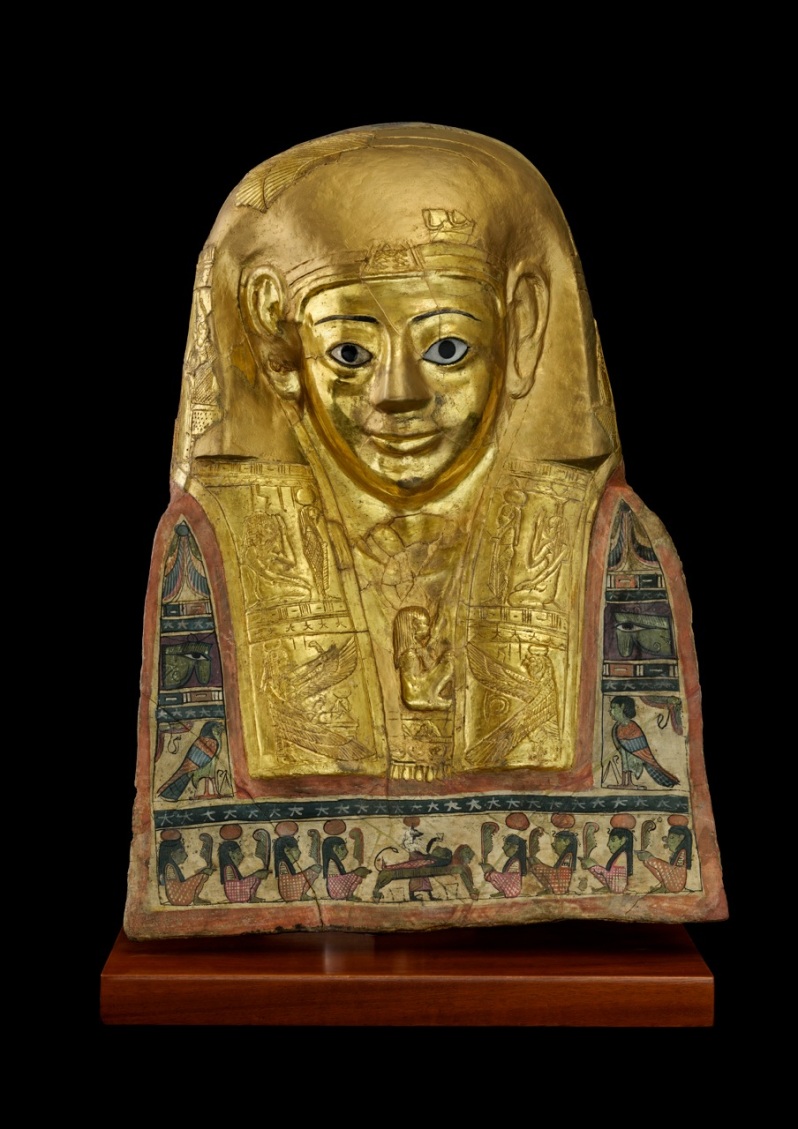 There are so many outstanding artefacts on show in Beyond Beauty of the very highest quality. Many have rarely, or in some cases never, been on public display before now and it is great that these objects are now being seen and admired by a much wider audience. Bravi to the curators and to Two Temple Place. A brilliant exhibition of “wonderful things.” Don’t miss it before the doors of Two Temple Place close at the end of April for another year.